"Yes, Ron Jackson, bar owner and restaurateur in Yokohama and the first-person narrator of Loose Ends In Yokohama, has some loose ends to tie up. The process not only of making amends but exacting revenge toward the end of one’s life is known as shuukatsu. As the novel opens, Ron finds himself on the receiving end of this ritual when an old friend comes into Ron’s bar offering him amends in the form of an ancient and valuable samurai sword as a thank-you for past friendship. The gift inspires Ron to review his own life, and thus begins the tale. He has a few things to resolve in his past, and we follow the process from beginning to end, becoming familiar with the streets of Yokohama, Japan in the process—a family he has wronged, a love he has betrayed, and a bully who has humiliated him more than once. One by one, we watch him clean the slate of what he owes and what is owed to him.

Loose Ends In Yokohama is a very good book, not only for author Alex Lund’s impeccable prose but for the goodness that emanates from its pages. It’s an odyssey that reminded me of my own debts and of my own scores yet to be avenged. It also familiarized me with the city of Yokohama, its streets, parks, dives, and inhabitants. Ron is the proverbial good guy, aging and having done some nasties as well as having been victimized. Sounds like all of us, doesn’t it? Yes, wouldn’t it be nice to tie it all up with a tidy bow before we depart for other realms? I enjoyed getting to know Ron
Jackson, half American, half Japanese, as through the process of shuukatsu he resolves the mysteries of his life. I’m sure you will enjoy it too." 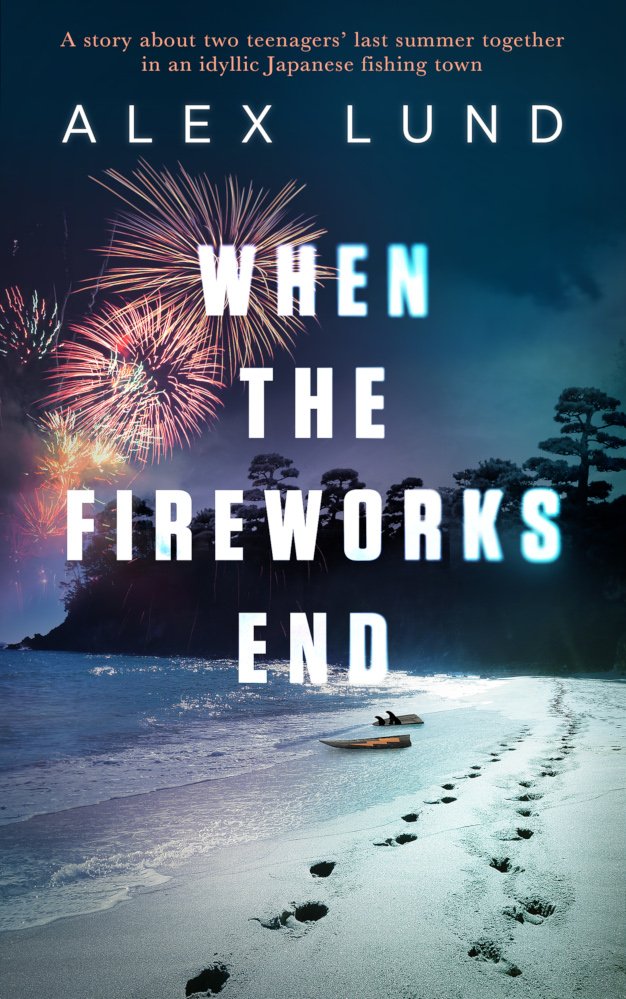 When The Fireworks End

"When The Fireworks End is a work of fiction in the coming of age sub-genre, penned for mature young adults and new adult audiences by author Alex Lund. Focusing closely on the culture and experience of growing up in a close-knit Japanese coastal community, we meet our protagonist Tomoya and his good friend Ken, who are determined to enjoy a final summer together before life takes them off in separate directions as they enter adulthood. But when tragedy strikes, Tomoya’s world shifts and he finds himself struggling to cope with the new realities and realizations which he faces. What results is poignant self-exploration and an insight into the strength inspired by true community.

Author Alex Lund has a keen sense for emotive writing, from both the psychological and social perspectives. The narration keeps us close to Tomoya through each emotional experience, the physical and mental sensations of which are sure to resonate with readers and endear us closer still to the young boy as he tries to process his new journey towards adulthood. On the bigger picture level, the coastal communities of Japan are beautifully depicted in original imagery and almost poetic literary lines, which creates a truly bittersweet atmosphere of tragedy amongst such beauty. The warmth and strength of community play an important role in keeping the novel from descending too far into the morose, and overall this makes When The Fireworks End a truly superb and high quality coming of age read for one and all."

A journey towards the top of Tokyo

"Shibuya Nemesis: A Journey Towards The Top Of Tokyo is a work of fiction in the new adult, coming of age and interpersonal drama sub-genres, and was penned by author Alex Lund. In this highly engaging and personal narrative novel, we find ourselves in the socially anxious world of protagonist Josh, who has just graduated from high school in Vancouver. With an aspiration of overcoming his fears and becoming a famous guitarist, Josh takes off for Tokyo and the Shibuya music scene to try to change his life. When he meets singer Miki, Josh is spellbound and the opportunity arises to connect with her on an emotional level through music. What results is a sensitive coming of age adventure with music imbued in every page.

Having recently read another novel by author Alex Lund, I was once again impressed by the commitment to character development which really drives the heart of the narrative process. Josh’s story is very different, involving a wonderful exploration and assimilation of a new culture as he tries to find his place in the big bright world of Shibuya, and the descriptive techniques truly bring the colors, flavors, and sounds of this exciting place to life.

Most of all, the emotional sensitivity of a young man with social anxiety who is trying to put himself out there in the world resonates through every experience that we live through Josh's eyes, and this is certain to endear him to readers and keep them captivated from beginning to end. Overall, I would certainly recommend Shibuya Nemesis as a superb read for young adults and adult readers alike."